Strum Bowing (or How to Groove with a Bow)

When you think of groove, what comes to mind? You probably think of those funky phat guitar jams or viral TikTok bops, right? I bet that word groove doesn’t trigger in your mind the thought of violins, violas, cellos, or upright bass, does it? Why not? It’s time we change that and become part of the groove family of instruments!

The bowed-strings community has long been behind in the contemporary rhythms game. Mostly taught as melodic instruments, the standard strings pedagogy has a giant gaping hole in it when it comes to rhythmic play and groove making. This article and video will start to fill you in on all of those missing lessons. Today, you begin your journey to groove mastery! Introducing the Strum Bowing Method!

Yes, this is about teaching you how to chop!

But, it is also about so much more than that! Developed by Tracy Silverman, the Strum Bowing Method encompasses all forms of rhythmic bowing techniques, from the chop to the shuffle and everything in between–any stroke you can think of can be part of the groove. That’s because it’s not about the bow stroke, it’s about the arm motion. When you understand this overall approach to rhythm, grooving will become much more natural for you.

Who is Jonathan H. Warren? Discover his music style and his biography.

OK, so how do I start my groove journey?

Alright. Lean in close… the secret to unlocking your groove potential… is… subdivisions.

A little anticlimactic, but stay with me.

In Silverman’s book, The Strum Bowing Method: How to Groove on Strings, he refers to subdivisions as the smallest particles of the groove–which he has named the Groovon, (pronounced “groove on”.) Like how an atom is made up of the electrons, protons, and neutrons; the beat is now made up of the groovons. 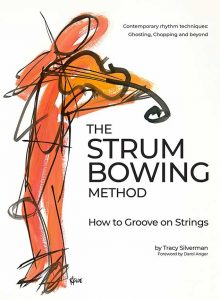 A light bulb went on over my head, and I realized that this was the key to teaching the chop and all that groovy rhythm stuff I played with my rock bands and Turtle Island String Quartet: all of the subdivisions are played in some way, not just the accents. So simple! It seems too obvious, but the truth is that playing the subdivisions of the beat is the common thread in all groove-based music and the missing link in contemporary string teaching. It’s the reason many string players can’t groove. Yet.

When a guitarist first learns how to play, a common first step is to pick a favorite song, learn the chords, and figure out how to strum along.

This strumming motion is, in itself, a basic rhythmic grid. To get a little nerdy for a second: the guitar player is locking into the smallest practical subdivision of the beat, the Groovon, with a constant down up down up right hand strumming pattern.

Once locked into this grid of groovons known as the strum, the musician is free to accent or ghost any part of the grid to create unique rhythms that will, by default, have a naturally solid groove foundation.

The term Ghost, in this case, means to play inaudibly or nearly inaudibly.

In other words, when a rhythm guitar player is playing, you don’t typically hear just a constant down up down up strum pattern in the music. Many of the groovons are implied rather than played. It’s like the way a cartoonist can suggest a brick wall with just a few bricks here and there. Your eye and imagination fill in the rest. You will hear that the rhythmic patterns vary throughout the song, but the guitarist will still have a constant strum pattern visually noticeable in the right hand (See “Secret to Grooving” video above for clarification).

This “locking into the grid” is not as natural for bowed string players as it should be; as it is for the guitarist. Silverman has an explanation for this as well:

It’s mostly because we don’t know how to ghost or mute notes yet. We know we can’t play a steady stream of subdivisions, but we don’t know how to leave some of the notes out–how to make it sound more implied than played. We may have been taught to make beautiful sounds on our instruments, but no one ever taught us how to not make beautiful sounds. Also, playing rhythm is not a native part of classical string instruction, which focuses more on melody and virtuosity. Strings are so difficult to play that the focus is on tone and articulation in the bow arm and intonation, accuracy, and speed in the left hand. Since strings are generally not used as chordal instruments, strumming chords to keep time for a singer or dancer is not something we typically learn how to do.

He goes on to explain that the grid we, as string players, are used to using is one that pushes and pulls to express emotion. We are trained to be melody crafters. Our push and pull of the tempo is encouraged, to an extent, as a way of adding beauty to the music we play and the melodies we make.

When we are trying to create or add to a groove though, the solid pulse is so incredibly important. Without it, the rhythm comes off sloppy and the groove falls flat. We need to be locked into the grid. Our bow hand needs to be steady with the groovon.

As he writes in The Strum Bowing Method:

Even if you only hear one bar of it, a great groove creates the illusion of eternity. It sounds like it has always been there, like it started before time began and will never end. You can’t alter it. You just hop on and ride it for a while.

Silverman explains that, unlike the push and pull of classical music, with a groove, steadiness is sacred.


The steadiness of a groove is a metaphor for the continuity of life itself. Grooves represent infinity.

Here are a few things you can quickly develop, which will greatly speed up your access to the world of grooving.

As mentioned above, one of the main reasons we haven’t thought of applying the simple idea of strumming to strings is that we don’t know how to ghost or mute notes. So let’s break down that barrier first.

Most string players assume that ghosting is all in the bow. But it’s actually mostly in your left hand. You need to dampen the string so that it can’t fully ring. There are 2 ways to do this:

It will take some trial and error to figure this out, so give yourself a chance. What you’re shooting for is a pitch-free kind of noise, which will be different, depending on how percussively or lightly you are using your bow–from a nearly silent wisp to a gritty chug. There are many right answers. (And keep in mind that most of those answers will not sound acceptable in classical music. However, they are not only acceptable, but necessary for grooves, trust me!)

When you think you kind of have it, here is a little etude I put together to help get the ghost notes into your bow arm. Take it slow at first. But soon the muscle memory will kick in and you’ll be able to play it with some style–to dance with it.

Another impactful way to practice is to play along with random tunes–from a playlist, radio, or wherever. What we need is a simple way to groove authentically with any music that we hear. I call it GPS for Strings. It will help you find your way to any groove.

The idea is to add each step to the previous ones.

When I say “Hum It”, what I really mean is to vocalize the groove in some way. Beatbox it. Imitate the drums.

“Strum It” means to air-strum it along with your voice. It’s all about physicalizing that subdivision–feeling the groovon.

The important difference between “Say It” and “Hum It” is that you are ready now to add the all important lyrics! They’re kind of simple but very meaningful–it’s just “Up” or “Down” to clarify the bow direction on all the accents. This is important because when you say things out loud, it forces your brain to be specific–it gives you clarity, which means you actually understand exactly where your bow should be on all the accents.

Once you have it in your voice and your body and your brain, then all you have to do is “Play It,” put your bow on the strings…and you have reached your destination.

The best way to utilize this is to apply it to random tunes as I mentioned above.

Ok Groove-maker, we’ve reached the end of this article, but the groove does not have to stop there!

This has been just a super brief overview of this Strum Bowing concept. If you want to learn more about anything we’ve talked about, Tracy has literally written the book on the subject! AND, as an extra bonus, he has also written a book of rhythm Etudes for both the solo instrumentalist and the string ensemble to enjoy! Many more lessons in written and video form await you at StrumBowing.com!

Special thanks to Tracy Silverman for adding so much value to my article with his “Strum Practice Tips and Tricks” section and giving us all so many cool things to work on!

We can’t wait to see what new grooves you all create! Stay creative out there and groove on!

←  NewerWhat stage monitor is best for a musician?
Older  →Create a wet sound for your effects chains