The acoustic violin is made of a hollow structure that amplifies the vibrations of the strings. Conversely, the electric violin is often made of a solid structure and must be connected to an amp to be heard.

The main difference is therefore related to the way in which the sound played is amplified. A classical violin has a sound box that naturally amplifies the sound produced by the vibration of the strings. While an electric violin does not have a sound box. To hear the sound that’s been played, electric violins need to amplify it through an external device such as an amp or speakers. 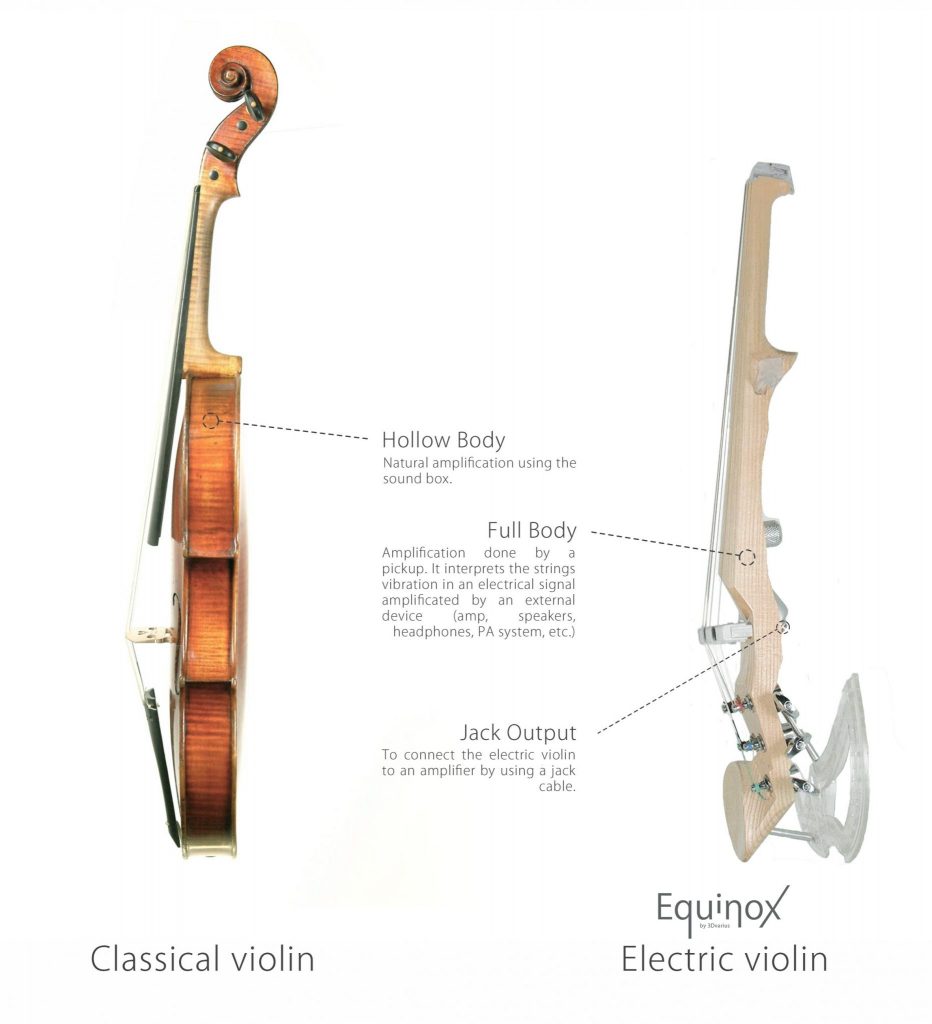 An acoustic violin is heard from the moment one plays it. Conversely, an electric violin not connected to an amp will not be heard by the public. A slight sound will emanate from the electric violin, but it will be barely audible…

At 3Dvarius, we study all the bodies and materials of our instruments. These studies are carried out in order to limit the amount of material and to lighten the final weight of the instrument as much as possible.

Equipped with a sound box, the classical violin does not need any particular technology to work. It uses a classical bridge, which is placed on the body of the violin and is sustained by the pressure of the strings. The bridge facilitates the transmission of the vibration of the strings to the sound box.

Equipped with a full body, the electric violin will have to retranscribe the vibration of the strings into an electrical signal which is then transmitted to an amp. The “manufacture” of this electrical signal will be carried out by one or more pickups contained in the bridge. The sound quality of an electric violin will depend on the type of bridge and the number of pickups it contains.

Every violinist has already received complaints from unhappy neighbors because of the sound produced by violin exercises. Sometimes the use of a mute is not enough to muffle the sound of a classical violin. Using headphones to amplify the electric violin can allow you to play quietly at home without disturbing those neighbors.

Discover all the advantages of the electric violin?

4 strings VS 5 or more strings

A classical violin has 4 strings: D (Re), G (Sol), A (La), E (Mi). An electric violin may have 4 or more strings. It is not uncommon to see 5-string electric violins. They also have the C (Do) string, which is generally used on violas.

Are you having doubts about your ability to switch from a 4-string to a 5-string violin?

These elements can disappear on electric violins for practical and aesthetic reasons. In fact, the field of the electric has no predefined graphic rule. Electric guitars and violins can have any type of design, colors, materials … Of course, they respect the main constraints of designing a violin and are obliged to preserve several elements to remain playable, such as the neck, the fingerboard, etc. But, beyond these few constraints, the only limit will be the ability of a designer to imagine his electric violin.

Electric violin designers very often move elements after making acoustic studies or only for the sake of the detail. For example, on the 3Dvarius electric violins, we dismantled the classical violin scroll. It has been redesigned. On the upper part of the electric violins, we will find the 3D-printing “scroll” that will exclusively support the strings. The pegbox was moved to the lower body through the use of guitar tuning pegs, in order to optimize the weight distribution of the electric violin.
On the other hand, the rounded base of the bottom of the classical violins has been preserved to allow any violinist to use his own shoulder rest. 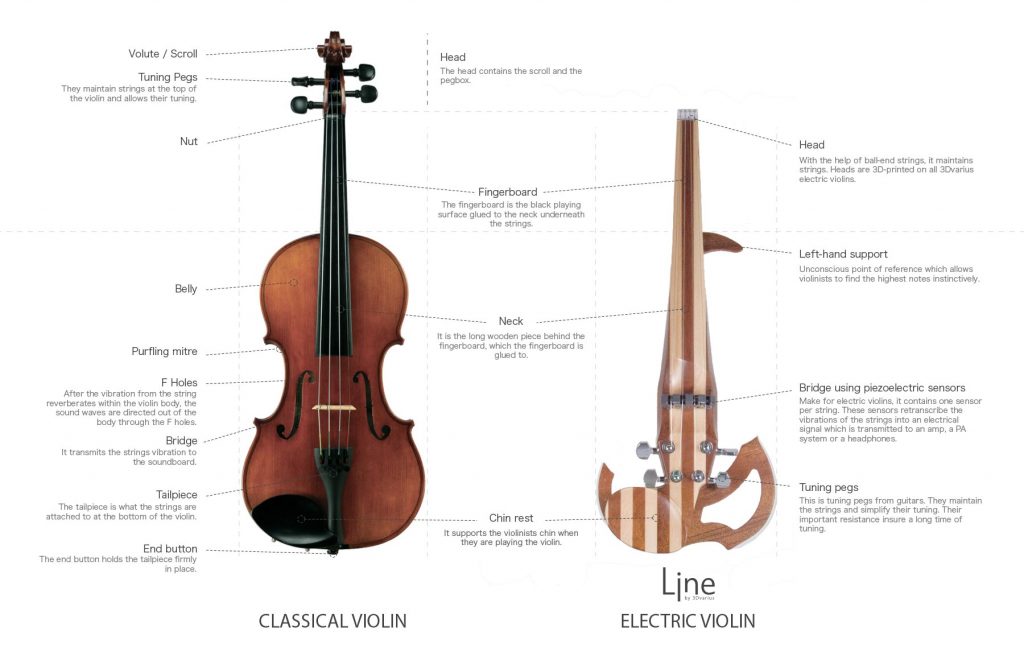 Click on the plan to display it in its bigger version

Adjustment period related to the disappearance of the sound box

When a violinist plays on an electric violin, the sound does not come directly to his ears, but comes from the amp or speakers that are around him. The path of the sound to the instrumentalist’s ear has a different provenance and is a bit longer. This will require a slight adjustment period for the violinist to resituate his perception of sound. After a few minutes playing, he will get used to this change.

All violinists trying for the first time an electric violin have the same feeling. They are destabilized by the origin of the sound. It’s a circumstance that they all refer to when we meet them…

Disappearance of the soundboard vibrations

The classical violinist is used to feeling the vibrations of his classical violin. These vibrations are more or less important depending on the nuances made by the bow stroke.
The body full of an electric violin vibrates less. The violinist feels less vibration and may have more difficulty nuancing his notes. Just as for the origin of the sound, he will need an adjustment period and practice to retrieve his usual habits. Classical violinists initially tend to over-emphasize the bow to nuance their notes. But this does not really work with an electric violin. Forcing the bow does not really nuance the notes. It is better to play with your fingers by coupling their movements with effects.

The sound between the two instruments will always be different. It is possible to get closer to a classical sound with an electric violin using small effects. But let’s be honest, if you wanted to play classical music, you would be playing it on a classical violin.

We were frequently asked for a comparison between the sound of a classical violin and that of a 3Dvarius. So, we recorded Telemann’s Sonata in Canon for 2 Violins to offer you a comparison.

The intention of the electric violin will be to use a multi-effect pedal to improve and transform the sound produced. Transform your sound into a Jimmy Hendrix saturated distortion, or add a reverb and delay to make it livelier!

With the effect pedals, we can position ourselves on any musical register: rock, metal, jazz, pop, etc.

The following video is a cover of the Song of Storms, taken from the video game The Legend of Zelda. It uses many bass, pizz, wah wah, effects among others.

Read our article about how to choose an effects pedal.

A violin for every use

To conclude, and you have understood this, each violin will have its predispositions for each kind of use. It is not uncommon to meet violinists who have a classical violin and an electric violin. Moreover, in the professional field, most violinists have one or more copies of each instrument. They choose to use one or another depending on the playing conditions. In classical performances such as a church ceremony, they will opt for their classical violin and prefer their electric violin for a little more rocker performances.

←  NewerWhat hearing protection options are there for a musician?
Older  →Create the technical rider of my band