What is a wireless system for musical instruments?

A wireless system for musical instruments is the element that will replace the jack cable linking your instrument to the very next element in your audio signal flow. This could be between your violin, guitar or bass and your multi-effects unit, or directly between your cello and your amp.

The wireless system will receive and transmit the signal coming from the musical instrument without any physical connection.

How do wireless systems work?

A wireless system works with two components: a transmitter and a receiver. The transmitter is positioned on the jack of your violin and the receiver is connected to the rest of your audio signal flow. It works in a simple way! If you play an instrument, the transmitter sends the signal it receives to the receiver, which picks it up. The signal then travels to the amp or the PA system.

Most wireless devices now come with small transmitters that you can plug into your violin or guitar. They are no heavier than a jack cable.

What kind of technologies are used in wireless systems?

If you are looking for a wireless system and are trying to understand their characteristics, you will have to understand the differences between a multitude of terms that describe different technologies: VHF, UHF, 2.4Ghz, Wi-Fi, analog, digital, channels, etc. Let’s try to understand all that!

All wireless systems communicate on a frequency band to transmit the signal. In the field of music, we use Ultra High Frequency (UHF) band or the 2.4Ghz frequency band which is also used for conventional Wi-Fi.

The UHF system uses radio frequencies and more precisely the range between 300Mhz and 3000MHz which can support a large number of devices at the same time. Please note that each country has its own band of usable frequencies. It is not the same from one country to another.

This frequency band is legally accessible everywhere in the world which means it is universal. This can also be a inconvenience, because if there are many devices using this network in the vicinity, interferences can occur. But in reality, this does not happen very often, because manufacturers have developed a system of interchangeable channels. This means that if the channel on which you are transmitting is saturated, you can simply change channels.

We have mentioned the name VHF in the title, which stands for “Very High Frequency”. It also relies on radio frequencies. But in the music field, it is not used or not anymore.

This is a raging debate in the music community! Each musician has his own opinion on the subject. Some will tell you that analog is better and others prefer digital. Each system has its advantages and disadvantages. UHF wireless systems are analog and wireless systems using Wi-Fi frequencies are digital.

A UHF system is analog and will have a lower audio quality than a digital system. In fact, to send the audio signal through the radio frequencies, it has to compress it and then decompress it. This implies small data losses. A digital system does not need compression to transmit the signal.

An analog UHF system, on the other hand, has no latency when passing through radio waves. A digital system will always have a small latency. Today, they are minimal, due to the fact that the quality of the products offered on the market has greatly improved.

A UHF system covers a very wide range of frequencies. However, the entire frequency range is not entirely available and many sources use it (radio, TV, etc.). It is therefore essential to check that the band used is available and that there is no interference.

Wireless systems based on 2.4GHz frequencies use channels. The number of channels is limited, usually between 4 and 6 maximum. Musicians are advised to select the least used channel in the area to prevent any interference. Some devices are able to automatically choose the best channel. Others can even change the channel in the middle of a live performance if they determine that the current channel is overloaded!

What are the pros and cons of a wireless system?

The first advantage of a wireless system is the freedom of movement. The musician is no longer dependent on the length of his cable and can move from one end of the stage to the other. This way, during a solo, it is easier to position yourself at the front of the stage right next to the singer. The stage presence is thus simplified.

We have tested several wireless systems and their coverage is more than sufficient for large stages. Most wireless systems provide a reach of at least 25 to 30 meters when there are no obstacles to block the transmission. Of course, if there is a wall between the transmitter and the receiver, the signal may be affected! But walls on stage are pretty rare 🙂 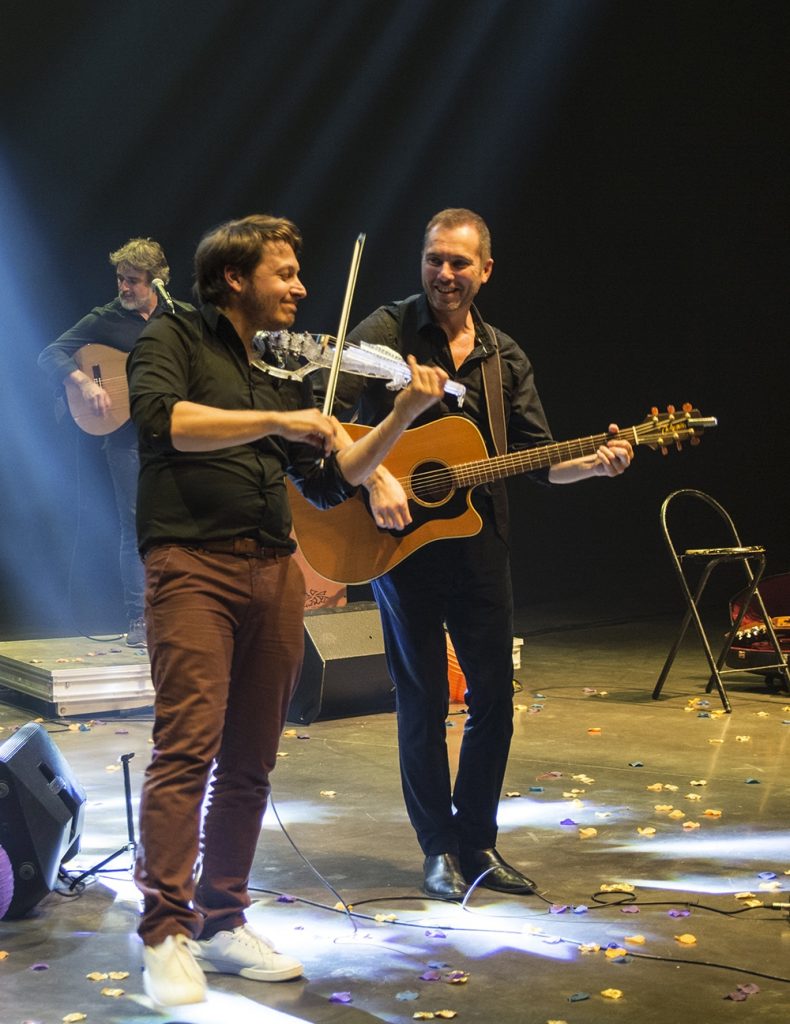 Using cables can quickly become a hassle! The more people you have on stage, the more complicated it gets. If you move around, you unwind your cable and when you go back to your spot, it will most likely be lying around in the middle of the stage. What musician hasn’t gotten tangled up in a bunch of cables!

Wireless systems are also an advantage for keeping a clean stage. What could be more professional than a stage without dozens of jack and XLR cables lying around! All bands and musicians try to hide them from the audience, but still there is a pile of cables all over the floor.

This is the main reason why we use different Xvive wireless systems at our events. Our stage is cleaner without cables lying on the floor.

All cables deteriorate over time! That’ s because you have to wind and unwind it constantly. The ground wire inside the jack cable can become weak or even break. It is often difficult to realize that a jack cable has been damaged. The reason for this is that we play non-stop, we tend to focus on the playing itself and we usually think that the problem originates from something else.

A wireless system cuts through all the ground problems. Of course, it can also deteriorate over time. But a device stored in a box is usually better cared for than a jack cable thrown in the bottom of a bag or a case.

Wireless systems run on regular batteries or lithium batteries. As with any such system, the battery has a limited lifespan. You should always remember to replace the battery or charge your wireless system properly so that you don’t run out of power on the day of the concert. This requires a little bit of planning ahead!

Most professional wireless systems use lithium batteries. They last long enough to deliver a full performance. Most wireless devices have at least a 3- to 4-hour battery life.

Just like a phone battery, as it gets charged and discharged, it will wear out and its life span will decrease over time.

Regardless, never leave home without a jack cable in your case. If you forget to charge your wireless system, you can always switch to a cable connection.

Technically, latency is the delay between the moment when the musician plays, and the moment when the sound played is emitted by the speakers or amplifier. There will always be latency in this process whether it is done with a cable or a wireless system. The cable path is more direct, so there is less latency (or none at all). Analog (UHF) wireless systems have very low latency because they use FM radio waves. Digital wireless systems (2.4GHz Wi-Fi) have a slightly higher latency. However, do not expect it to be huge.

Read the specifications of the wireless systems, their latency is always mentioned! Any latency below 8ms will not be noticeable. It is so low that you will not even notice it.

Many musicians believe that a wireless system decreases the quality of the signal that is sent. This is technically true. But it is mostly minimal and hardly perceptible to humans.

To transmit the sound of a musical instrument or the voice in the case of microphones, analog wireless systems (UHF) will compress the signal so that it can be carried through radio waves. Once this signal reaches the receiver, it is decompressed. During this process, there are inevitably losses. They are small, but still present.

Digital systems do not involve any compression process. The sound is therefore generally of better quality.

We did tests with musicians where we tried to recognize a sound with a wireless system or a sound through a cable. None of them could tell for sure which sound was wireless or cable. 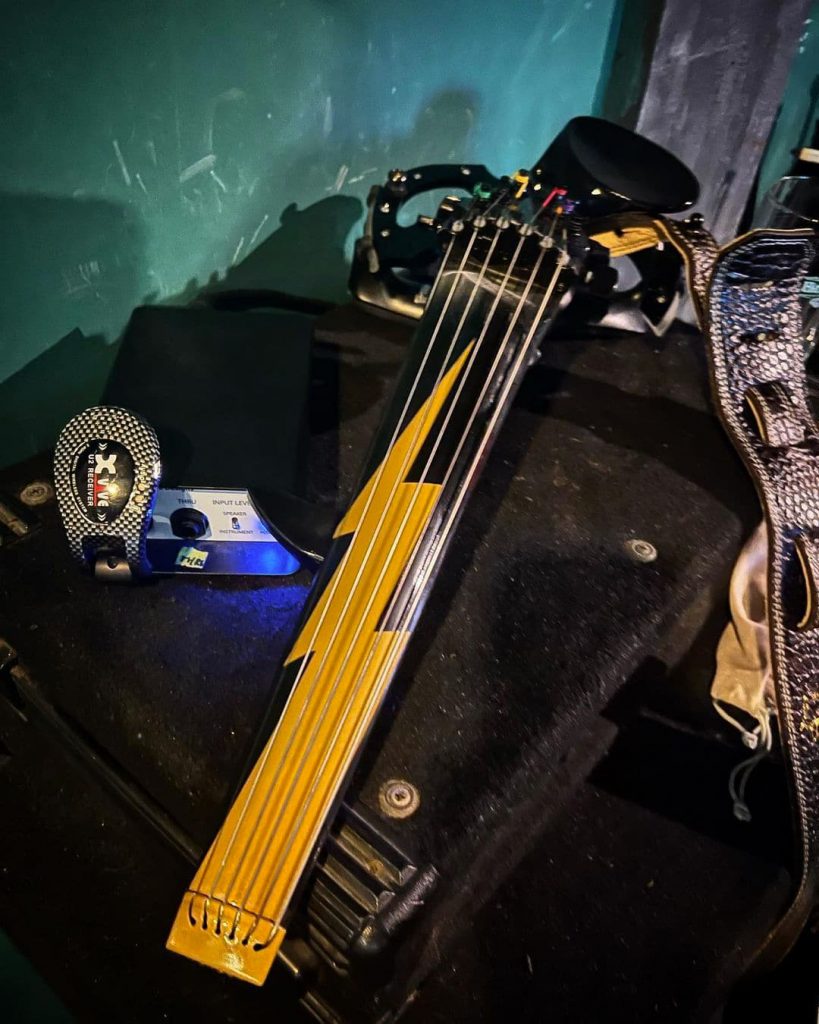 The difference is certainly observable in a DAW when analyzing the frequency ranges, but to the human ear the difference is not noticeable. Purists will always tell you that cable preserves sound. It does! But do we need this quality for a concert, where the signal travels from device to device before being played through the speakers? In the studio, there is certainly an interest. On stage, however, there is none.

Many professional musicians and singers use wireless systems during their concerts. If the quality wasn’t there, they wouldn’t even bother using them.

Is it possible to play several instruments with several wireless systems?

Many bands with 5 or 6 musicians use wireless systems and in-ear monitors (most of them also use wireless) and have never had any problems. Generally speaking, you shouldn’t have any problems unless you are in a place full of interference and in a neighborhood that abuses its Wi-Fi network. This creates a lot of factors that accumulate at the same time.

Consider that at events like the NAMM Trade Show, we have hundreds of exhibitors in a huge hall playing all day with wireless connections. We have never experienced any interference. 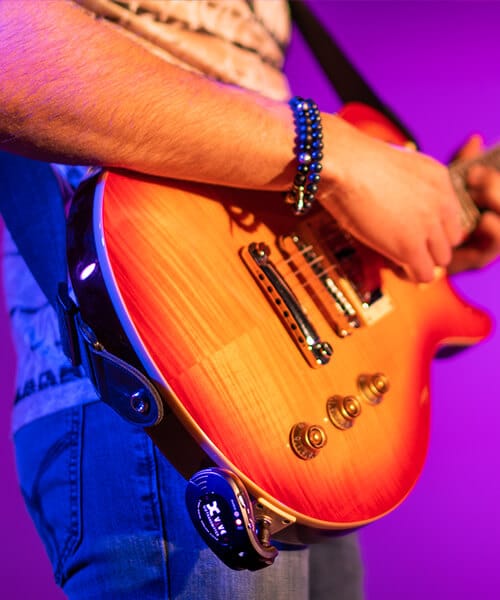 Do they work with most other devices?

However, beware of entry-level wireless systems that sometimes handle the intensity of passive pickups poorly. The result is a nasal sound that comes with sudden and blurred interruptions. This is clearly a sign of poor quality, as it is neither compatible with active pickups nor with the majority of passive pickups.

How to improve the performance of your wireless system?

A few simple rules will improve the reliability of your wireless system.

The favorite effects of 30 violinists
How to create the sound of an acoustic instrument with an electric instrument using Impulse…
How to choose an amp for your electric violin?
Posted in Electric World, Equipment & Accessories and tagged wireless.
Share

←  NewerHistory of the wah
Older  →The looper: an ally for the solo musician