Deal with interference in the audio signal

In the electric violin, as in any electrical or electro-acoustic instrument, disturbances of the sound spectrum may appear at different points in the sound chain. These disturbances are more commonly called audio interference. This noise can be generated by different elements and it can be (very) difficult to identify its source. To find it, it will be necessary to proceed by a process of elimination. You’ll have remove and disconnect one by one the elements in order to identify the source emitting the interference.

Once the source is identified, you can try to find a solution in order to reduce and eliminate the noise if it is possible. In any case, note that dealing with interference at its source will always be much more obvious than dealing with it at the sound chain’s output. If you think that a sound engineer will have all the solutions to delete an interference, think again! The simplest solution is always to remove it or at least to reduce it to the maximum so that you can then rework it numerically.

When put end-to-end, these interferences can generate an infernal hubbub for the members of the audience and the sound engineer.

During the balance, or before starting a studio recording, try to identify the cause so you can reduce and, if possible, remove this inconvenience. We have listed several parameters that can cause interference in your sound chain.

Piezoelectric pickups are designed to “translate” a vibration, which they receive, into an audio signal. This refers to the vibration of the strings in the case of a violin. When the string vibrates, it applies pressure on the piezo pickup which generates an electrical signal that is then transmitted to an amplifier. Here you can see an Equinox equipped with a bridge that uses one pickup per string.

Magnetic pickups work differently. They consist of magnets wrapped in a coil of copper wire. They generate a magnetic field that changes when the strings vibrate. This movement will generate an electrical signal that is sent to an amplifier.

These technologies have the advantage of not generating feedback, as opposed to the use of microphones. Nevertheless, other kinds of interference can occur and we will explain why.

When it comes to your pickup, note that it must be isolated to limit any disturbances produced by electromagnetic interference. Usually, the pickups of a musical instrument are shielded to avoid this kind of inconvenience. This is the case with our pickups; each pole piece is individually shielded.

However, it is impossible to ensure perfect shielding. Because any pickup can react to the environment in which you find yourself due to electrical or electromagnetic interferences. This are the most difficult interferences to identify because they are invisible and not related in any way to your music equipment.

These interferences can originate from any element capable of interfering with the pickup. In such a case, you will hear an identifiable continuous buzzing in the frequencies corresponding to the electric current of your country: 50Hz in Europe and 60 Hz in North America, for example.

This sound is the “bzz” sound that you often hear on electric guitars. Magnetic pickups are a little more prone to interference. In the following video, you can hear an example of this bzzz sound.

In order to reduce this noise, you may simply need to move a few feet, or find the device that is producing the interference and turn it off. It could be some kind of light source, an electrical device, radio waves, Wi-Fi, a phone antenna near your location, a PLC connection (an Internet transmitter that uses electricity), etc. For instance, we had the case of a violinist who had problems because of his fridge which, when turned on, disturbed the electrical signal of the whole house.

Very often, if you turn in certain directions, you will find a position that generates a lower interference… This position will be the ideal position to play in the studio while recording as little noise as possible. In the context of a concert, needless to say, you should not play turned back on the audience, you will have to find another solution.

In this case, you can use the “ground / lift” switch of your DI box or your multi effects processor if they have one. It will cut the ground conductor between the input and output circuits and stop the interference. This type of switch sometimes exists on amplifiers and will play the same role.

Lighting is also a disruptive element that can generate interference. Particularly neon lights that generate a permanent “buzz”. If you have good ears, you must have heard that neon lights emit this noise as soon as they are lit. The solution: limit the number of light sources in the studio or use another type of lighting.

Lighting using a dimmer will also generate more or less noise; we are talking about those switches that allow both to turn on or off a light source, and manage the light intensity. It is found in most North American homes (and much less in Europe). These dimmers can accentuate interference. In that case, find the position that will generate the least noise. Normally, this will be the position in which the dimmer is turned to the brighter setting.

In the interest of consistency in the levels of the audio signal, sometimes a preamplifier is necessary in order to control the impedance of the signal created by the instrument. A poor-quality preamplifier can generate a “hiss” at high volume.

It is better to use musical instruments that don’t have a built-in preamplifier (with no internal power supply, such as a 9V battery, connected to the sound output). Not having a preamplifier will allow you to better control your sound chain and effects chain. 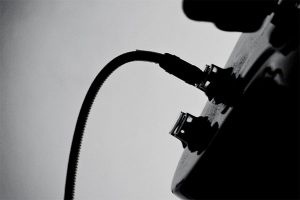 We use 6.35mm jack cables or XLR cables for musical instruments and accessories. Some of them are shielded and suppress interferences.

What are the differences between balanced and unbalanced cables?

And what does TRS and TS connectors mean?

Do not use excessively long cables

The longer the cable that connects your violin to your amp or effects pedal, the more likely it is to pick up interference, such as unwanted radio waves. They will add to the audio signal and create more or less loud noises. It is better to use cables that are not too long.

Do not coil them in a circle

We tend to coil our cables in a circle to store them, and not to unroll them in their entirety when we are on stage or in a studio to avoid having long cables lying on the floor. However, when leaving the cables coiled, they will play the role of an antenna that will capture the interference waves and therefore generate noise. Unwind them to limit the interference!

At first sight, all your cables seem to be in good condition, yet after unwrapping and wrapping them, pulling them or walking on them, the internal wiring may break. If the ground conductor is broken, interference will be automatically generated. It will be necessary to test them one by one to identify the cable which is at the origin of the interference. Once identified, you have 2 options: if you are a bit of a DIY enthusiast, you can try to repair the ground cable, if you have no idea how to do it, then there is no point in keeping it, just replace it. And remember to discard the broken cable so you don’t use it again.

A wireless system can eliminate or limit buzzing sounds. Likewise, it shouldn’t be affected by the distance between the transmitter and the receiver as long as you stay within its operating range. The disadvantage is that they use the same frequency bands as many other devices. This can disrupt the signal transmission between the transmitter and the receiver. Today, we can find wireless systems that can scan through frequency ranges and select the least used one in your immediate surroundings when switching on. Some can even change frequency ranges in the middle of a concert without you even noticing. 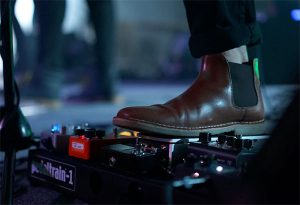 The effects processors are a double-edged sword. They will improve your sound if you use them correctly and on the other hand, can completely degrade it if the settings are not well adapted. Note that a very low-end multi-effects pedal will invariably create a blast, which traduces into noise.

Enchain the effects in a logical order to minimize the formation of interference at each stage. Also, be sure to correctly adjust the input gain in your effects processor and preferably choose good quality effects.

Do not hesitate to use sound cleaning effects such as the denoiser or the gate.

Read our article about the creation of FX chains for music instruments.

The sound diffusion system can be either:

A poorly tuned or poorly designed sound diffusion system will be a significant source of noise in the sound chain. If this interference is not eliminated upstream or downstream, it can quickly become very annoying or even unbearable. You must have heard it, we are talking about the “bzzzz” we hear when musicians stop playing on stage and the sound diffusion system is still active.

Again, the quality of a sound diffusion system (amp, speakers, sub, etc.) will depend on your budget. It is better to emphasize the quality of the sound system to its power. A good 30-watt amp will always be more striking than a big low-end 100-watt amp. Low-end amps are usually a source of a lot of interference!

Discover our article about the choose of an amp for an electric violin.

How to plug in and record an electric violin with a computer?
Why jump into the electric?
Taking a plane with a violin
Posted in Maintenance, On Stage, Practical knowledge and tagged effects, electric violin, feedback.
Share

←  NewerElectric Violin Buying Guide
Older  →Which single or multi-effects pedals should I choose for my electric violin?